WEDDING DAYS: When and How Great Marriages Began

Inspiring Wedding Stories for Every Day of the Year

BECAUSE OF EVA: A Jewish Genealogical Journey

You can also read all about it at BecauseofEva.com.

Finding Eva
An amateur genealogist's journey
Finding Ourselves in Family Photos
You have to know what family members looked like, to notice their features in younger generations.
Settlement House Spirit Lives on in a New York School for Immigrants
A former high school for Jewish women now helps all kinds of immigrants

Hunting a Dead Nazi
What happened to the Gestapo Chief of Tarnopol?
A Torah Lost and Found, and Found Again
Sixty years after my great-uncle's Torah was lost and found in the Holocaust, an Israeli cousin locates it for me.

Raking Dad Over the Coals
Why do so many husbands only cook outdoors?
Wedding Dazed
Do you have pre-wedding jitters? So did some famous couples!

WEDDING DAYS: When and How Great Marriages Began

A rich trove of gossipy tidbits, quirky coincidences, and romantic adventures, WEDDING DAYS is an ideal gift for engagements, anniversaries, and anyone who believes in timeless love.

Among the many questions answered in WEDDING DAYS are:

* What Elvis Presley sang to Priscilla as he carried her across the threshold;
* Why inventor Thomas Edison proposed to Mina Miller in Morse Code;
* Who was first called "The Queen of Hearts" long before the late Princess Di;
* Which woman inspired the building of the Taj Mahal;
* How the world-famous Siamese twins, Chang and Eng, managed to father 21 children!

As Writer-in-Residence for Victoria magazine, Susan wrote about the joy and challenges of writing WEDDING DAYS, and she poked (gentle) fun at Prince William & Kate Middleton's 2011 wedding in a personal essay for LA TIMES and other media.

Susan continues to speak about romance and great marriages to business groups, women's clubs, bridal show groups, and libraries across the United States.

Josephine wasn't impressed when she met Napoleon. The French army officer was somewhat shy and inexperienced, six years younger and several inches shorter than she. Her late husband had been guillotined the year before, during the Reign of Terror. Josephine had been imprisoned, too, but she was released days before her own scheduled execution. Virtually penniless, with two children to care for, she borrowed money from relatives, fixed herself up, and looked for a new and suitable protector.

When Napoleon was promoted to brigadier general, she focused all her attentions on him. At thirty-two, her body was still voluptuous. She flattered and teased him, beguiled and seduced him, making him half-mad with passion. "To live with Josephine is to live in Elysium," he wrote. "A kiss on your mouth, your eyes, your shoulder, your breasts, everywhere! everywhere!"

They married in Paris in 1796. Signing the wedding contract in the mayor's office, Napoleon added eighteen months to his age and Josephine subtracted four years, making them both - for the moment - twenty-eight. Afterward, they walked back to her apartment; her children were with relatives, but her pet dog, Fortune, was at home.

The tiny black-faced pug had a nasty disposition and snapped at everyone except his mistress. He snarled when Napoleon entered the house and barked ferociously when he climbed into Josephine's bed. Next he nipped at Napoleon's heels, sinking his teeth into his legs. Napoleon tried tossing the little monster out the door, but Josephine blocked the way, insisting that her sweet pet always slept beside her and getting married wasn't going to change that.

Two days later, Napoleon and his troops departed for Italy and conquered it in record time. In eight years, he and Josephine became emperor and empress of France. She never parted with the wedding ring he gave her; inscribed inside were the words, "To Destiny!" 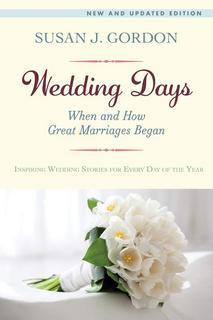 "An inspiring collection of romantic and very private anecdotes of the rich and famous" - NEW YORK DAILY NEWS.

"This compelling and well-researched tome tells the endearing tales of politicians, actors and artists and how they came to tie the knot.... Offers a rare and valuable glimpse of those too-often apotheosized by greatness" - MODERN BRIDE

"Those real-life stories ... are a refreshing break from the latest romance novels, and may even bring back memories of your own wooing and wedding" - L.A. PARENT

"A tantalizing dip into the culture and value of the times. Along with the history, you learn that the more things change, the more they stay the same: dating has always been a rollercoaster ride; brides and grooms have always had the jitters; parents have always meddled; and the search for true love never, ever ends" - BRIDAL GUIDE

"Priests and others who help couples prepare for marriage can read the stories to the couples. Great fun, and inspirational to boot" THE CATECHIST'S CONNECTION

Email me to purchase a signed copy of Wedding Days.
Interested in reprinting my articles? Email me about rates.
Loading…}